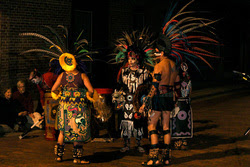 The Chikawa Aztec Dancers, shown here at last year's Day of the Dead celebration in Nacogdoches, will return for this year's Día de los Muertos Fiesta to be celebrated from 5 to 9 p.m. Saturday, Nov. 1, along Church Street and at The Cole Art Center @ The Old Opera House.

NACOGDOCHES, Texas - A performance of the Chikawa Aztec Dancers is just one of the many fun-filled activities that will be part of the Día de los Muertos Fiesta to be celebrated from 5 to 9 p.m. Saturday, Nov. 1, along Church Street in downtown Nacogdoches.

Día de los Muertos, or the Day of the Dead observance, is considered a cheerful celebration of life, honoring the souls of the deceased. Día de los Muertos is a Mexican term derived from the Roman Catholic All Saints' and All Souls' days, traditionally observed Nov. 1 and 2. An array of activities, ranging from decorating graves to creating home altars, typically highlight the celebration that can last for days.

Last year's local event saw hundreds of East Texas residents attending the celebration/fundraiser inside and outside The Cole Art Center @ The Old Opera House, and this year's event promises to be even bigger and better, according to Lisa Steed, events coordinator for art galleries at Stephen F. Austin State University.

"We're excited to be the only East Texas celebration of this ancient tradition and are delighted to have many student organizations come together to create a multi-cultural event in downtown Nacogdoches," Steed said.

Co-chairing the celebration this year are Kat Garcia and Merci Nicklas, board members for SFA Friends of the Visual Arts, which is the coordinating organization for Día de los Muertos Fiesta.

"This event is more than a fundraiser," Garcia said. "It is a cultural and community celebration. We're trying to bring to life an awareness of this tradition and encourage local artists and community members to support and give back to the School of Art."

A highlight of the evening will be a performance of the Chikawa Aztec Dancers. Based in Conroe, the group performed before an enthusiastic Day of the Dead crowd last year, and organizers are pleased they will be returning this year, Steed said.

Also taking the stage that night will be the SFA Classical Guitar Ensemble, singer/songwriter Lizzy Alvarado and School of Theatre students, who will present a preview of the upcoming musical "Spamalot" to be presented by the SFA schools of Theatre and Music Nov. 18 through 22 in W.M. Turner Auditorium. "Spamalot" is part of the 2014-2015 University Series.  Festival goers will be able to sign up to win tickets to "Spamalot" at the 103 The Bull radio station booth at the event.

A traditional Day of the Dead foot procession will also take place that night as part of the festivities.

Approximately 30 booths, ranging from food to jewelry to face painting to art and more, will be manned by various organizations, many of which will be SFA student groups such as the SFA Art Alliance and the School of Theatre. Proceeds from the Friends of the Visual Arts booth will benefit gallery programs and art scholarships, while proceeds of other booths, including food sales, will benefit those individual organizations. A limited number of booth spaces are still available. Call (936) 468-6557 or contact sfaartgalleries@sfasu.edu for information. Booths will be lined up along Church Street, which will be closed for the night's celebration.  Other participants include:  CASA of East Texas, Merci's World Cuisine, Only for Me Jewelry, Crawford Farms, Vicki's Sugar Skulls, the Nacogdoches Film Festival, La Batcueva Comic Art, the Angelina Spanish Club, the Woden Beta Club, the Woden Spanish Club, and a number of SFA art students selling their hand made art.

A silent auction, featuring retablos, ex-votos, and other art items will take place inside the Cole Art Center. Bidding will begin Tuesday, Oct. 28, and continue until about 7:45 p.m. Nov. 1. Winners will be announced that evening. Retablos, referred to as "laminas" in Mexico, are small oil paintings on tin, zinc, wood or copper, which venerate a multiplicity of Catholic saints. Counterpart to the retablo, ex-votos are devotional paintings on canvas or tin, which offer thanks to a particular saint in the form of a short narrative, according to information found at colonialarts.com.

The event will feature some free children's activities, including a booth where children can color their own paper sugar skull mask, which is the traditional image associated with Día de los Muertos.

Fiesta organizers are bringing back the widely popular Day of the Dead community altar where community members can pay tribute to friends and loved ones who have passed on by placing photos at the altar or writing personal messages on a memory card. The altar sits in the window of Cole Art Center. Gathering tributes is already under way and will continue until Thanksgiving.